Gary Gaetti is a former Major League Baseball Player and World Series Ring holder, a 4 time Gold Glove Award Winner, an ALCS MVP, a 2 time American League All-Star and a Silver Slugger Award Recipient. He grew up in Centralia, Illinois. Gaetti played third base for the Minnesota Twins from 1980 to 1990, the California Angels from 1991-1993, the Kansas City Royals from 1993-1995, the St. Louis Cardinals from 1996-1998, the Chicago Cubs from 1998-1999 and the Boston Red Sox in 2000.

Gaetti won a World Series with Minnesota in 1987 and was the MVP of that year's American League Championship Series against the Detroit Tigers. In 1987 Gaetti became the first player ever to hit home runs in his first two postseason plate appearances.

After his playing career Gaetti began coaching in 2002 as a member of the Minor League's New Orleans Zephyrs' Triple-A staff. In 2004, he was appointed hitting coach for the Houston Astros where he helped the club to an NLCS championship in 2005 and their first-ever World Series appearance. Gaetti also managed the independent league Sugar Land Skeeters from 2012-2017. Dwight Bernard was born in Mount Vernon, Illinois. Bernard is a former Major League Baseball pitcher. Bernard played in the major leagues from 1978 to 1982 for the Milwaukee Brewers and New York Mets. While playing for Milwaukee he was a member of the 1982 squad that won the ALCS and he pitched in Game 6 of the World Series. Eversgerd, a left-handed pitcher, played college baseball at Kaskaskia College in Centralia, Illinois where he would later be named to the community college's athletics hall of fame. Eversgerd has played with three major league teams, the St. Louis Cardinals, the Montreal Expos, and the Texas Rangers.

Kirk Rueter is a former Major League Baseball Player who was born in Centralia, Illinois, and graduated from Nashville Community High School and then played for Murray State University. Rueter was a former left handed pitcher who started his career with the Montreal Expos. He played for them from 1993-1996 and he also played for the San Francisco Giants from 1996-2005.

For nine of his 13 MLB seasons, Rueter proved to be one of the San Francisco Giants most reliable starting pitchers. In fact, when the Giants went to the World Series in 2002, Rueter posted perhaps the finest season statistically, with a 14-8 record and a 3.43 ERA. By the time he retired in 2006, he was the most successful left-handed pitcher in San Francisco Giants history, with 105 of his 130 career wins in a Giants uniform. 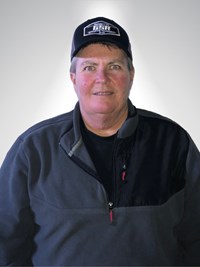 Torey Crowell is a native of Centralia, Illinois attending and playing sports at Centralia High School. After graduation, followed by 23 years in the printing field she went back to school and received her Associates degree from Kaskaskia College and a Bachelor of Science degree in Information Technology from Capella University. After completing her bachelor’s degree she was the JUCO Head Softball Coach at Kaskaskia College for 10 years where she did all of the recruiting, training and workouts for hitters and pitchers. Crowell has played many sports throughout her life, which includes over 25 years of softball. Jack Harting is a lifelong resident of Centralia, Illinois. Harting and his family operated Harting Auto Supply from 1964 to 2018. Harting brings 55 years of experience as both a player on the field and a coach off the field. He helped start the Centralia Buds an amateur baseball league in 1977, a team that is still active today. He has coached both baseball and basketball in Centralia and the surrounding area for 40 years. He is a member of the Clinton County Baseball Hall of Fame and a member of the Mon-Clair Baseball League Hall of Fame. Harting has had the pleasure of playing next to, as well as coaching, many professional athletes throughout his life. He played or coached with all of the Major League ring holders that help make up the Gaetti Sports Academy MLB Coaching Roster. Harting has always found joy in helping the younger generation to find sports and to help them build the desire to play it with passion. Mr. Curt Jones is from Kinmundy IL. He played baseball and basketball in High School and went on to play college baseball at Lincoln college for 2 years and North Western Missouri State University for 2 years! During and after college, for 20 years Curt played for Centralia Merchants and Centralia Budweiser. Curt retired from teaching at South Central High School this spring after 24 years and continues to coach there. Curt says "I am looking forward to coach at GSA because I enjoy working with kids and most of the coaches there have been personal friends of mine for many years. I am expecting this overall experience to be a lot of fun". Mr. Jim Boehne is from Hoffman IL. James played baseball at Carlyle High School, SWIC and Louisiana Tech. James has also coaches at Louisiana Tech for 3 years as the pitching coach, University of New Orleans for 8 years as a hitting coach and McKendree University for 19 years as the head coach. Jim says "I am excited to share my love and knowledge of the great game of baseball with young people!" Shane is from Woodlawn, Illinois. Shane’s baseball career consists of playing for Woodlawn High School, Murray State University (with Kirk Rueter) and the Cincinnati Reds Minor League System and coaching Woodlawn High School!
Shane is excited to be a part of our team here at GSA and he says "I can't wait to see all of the progress our athletes make”.